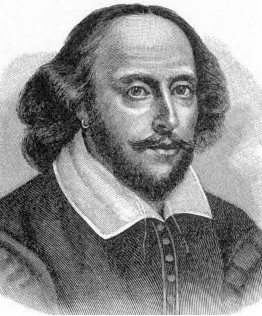 William Shakespeare was a renowned English poet, playwright, and actor born in 1564, in Stratford-upon-Avon. His birthday is most commonly celebrated on 23 April, which is also believed to be the date on which he died in 1616.

His father, John Shakespeare, was a burgess of the borough, who in 1565 was chosen an alderman and in 1568 bailiff (the position corresponding to mayor, before the grant of a further charter to Stratford in 1664). He was engaged in various kinds of trade and appears to have suffered some fluctuations in prosperity. His wife, Mary Arden, of Wilmcote, Warwickshire, came from an ancient family and was the heiress to some land. (Given the somewhat rigid social distinctions of the 16th century, this marriage must have been a step up the social scale for John Shakespeare.)

Stratford enjoyed a grammar school of good quality, and the education there was free, the schoolmaster’s salary being paid by the borough. No lists of the pupils who were at the school in the 16th century have survived, but it would be absurd to suppose the bailiff of the town did not send his son there. The boy’s education would consist mostly of Latinstudies—learning to read, write, and speak the language fairly well and studying some of the Classical historians, moralists, and poets. Shakespeare did not go on to the university, and indeed it is unlikely that the scholarly round of logic, rhetoric, and other studies then followed there would have interested him.

In November 1582, at age 18, William Shakespeare married Anne Hathaway, 26. Their first child, Susanna, was born the following May; twins, Hamnet and Judith, followed in 1585. Little information is available regarding Shakespeare's life from the time of the twins' birth until 1592 when he received his first public recognition as an upcoming young dramatist and actor in London. We know that at some point he left his family in Stratford, but we know few specifics. Critics hold several theories. One asserts that during the mysterious seven-year period Shakespeare worked as an assistant master of a grammar school. Another popular theory maintains Shakespeare worked as a butcher's apprentice during this time but ran away to London where he was received into the theater. Another theory holds that during the seven-year period, Shakespeare made a living as a deer poacher who was eventually sent away from Stratford as punishment. Other theories contend Shakespeare was a moneylender, a gardener, a sailor, a lawyer, or even a Franciscan. Unfortunately, though, none of these theories is any more likely than another; no one knows with complete certainty what Shakespeare did between 1585 and 1592. All we know for sure is that by 1592 he had arrived in London, leaving his family behind, and had begun what is perhaps the most successful literary career the world has ever known.

Between the years of 1588 and 1613, Shakespeare wrote 38 plays. His dramatic work is commonly studied in four categories: comedies, histories, tragedies, and romances. In addition, Shakespeare wrote several Ovidian poems, including Venus and Adonis (1593) and The Rape of Lucrece (1594). Shakespeare is also well known for his sonnet sequence written in the early 1590s, which is composed of 154 interconnected sonnets dealing with issues such as love, fidelity, mortality, and the artist's power and voice.

Although we commonly single out Shakespeare's work as extraordinary and deserving of special attention, at the time of the plays' performances they were typically dismissed as popular entertainment. Whereas Shakespeare's works are studied today as timeless masterpieces, the original audiences knew the plays were good but did not recognize them as exhibiting the apex of the dramatic art form. In fact, Shakespeare, despite all the attention his name has generated since the late eighteenth century, was not the most popular dramatist of his time. Ben Jonson, Shakespeare's contemporary (and Britain's first Poet Laureate), and Christopher Marlowe, a slight predecessor to Shakespeare, were both commonly held in higher esteem than the man whose reputation has since eclipsed both of his competitors.

In fact, Shakespeare's reputation as Britain's premier dramatist did not begin until the late eighteenth century. His sensibility and storytelling captured people's attention, and by the end of the nineteenth century his reputation was solidly established. Today Shakespeare is more widely studied and performed than any other playwright in the Western world, providing a clear testament to the skills and timelessness of the stories told by the Bard.

Tradition has it that William Shakespeare died on his 52nd birthday, April 23, 1616, though many scholars believe this is a myth. Church records show he was interred at Trinity Church on April 25, 1616.

In his will, he left the bulk of his possessions to his eldest daughter, Susanna. Though entitled to a third of his estate, little seems to have gone to his wife, Anne, whom he bequeathed his "second-best bed." This has drawn speculation that she had fallen out of favor, or that the couple was not close. However, there is very little evidence the two had a difficult marriage. Other scholars note that the term "second-best bed" often refers to the bed belonging to the household's master and mistress — the marital bed — and the "first-best bed" was reserved for guests.