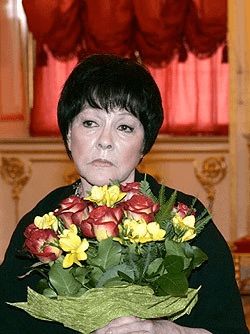 Izabella Akhatovna Akhmadulina (; 10 April 1937 – 29 November 2010) was a Soviet and Russian poet, short story writer, and translator, known for her apolitical writing stance. She was part of the Russian New Wave literary movement. She was cited by Joseph Brodsky as the best living poet in the Russian language.. She is known in Russia as "the voice of the epoch".
Despite the aforementioned apolitical stance of her writing, Akhmadulina was often critical of authorities in the Soviet Union, and spoke out in favour of others, including Nobel laureates Boris Pasternak, Andrei Sakharov, and Aleksandr Solzhenitsyn. She was known to international audiences via her travels abroad during the Khrushchev Thaw, during which she made appearances in sold-out stadiums. Upon her death in 2010 at the age of 73, President of Russia Dmitry Medvedev hailed her poetry as a "classic of Russian literature."
The New York Times said Akhmadulina was "always recognized as one of the Soviet Union's literary treasures and a classic poet in the long line extending from Lermontov and Pushkin." Sonia I. Ketchian, writing in The Poetic Craft of Bella Akhmadulina, called her "one of the great poets of the 20th century. There's Akhmatova, Tsvetaeva, Mandelstam, and Pasternak – and she's the fifth".