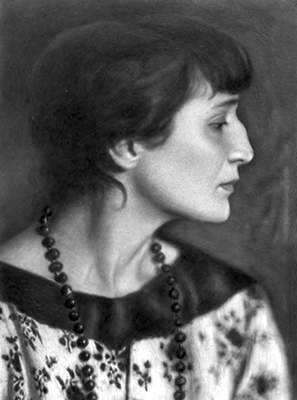 Anna Andreevna Akhmatova (real name Gorenko) was born in a Ukrainian village, near the city of Odessa on  June 11, 1889. A year later, her family moved to Tsarskoe Selo (Tsar’s Village) near St. Petersburg, where she lived and studied until she was 16.

Akhmatova started writing poetry at the age of 11, inspired by her favourite poets: Pushkin, Racine and Evgeny Baratynsky. Her interest in poetry began in her youth, but when her father found out about her aspirations, he told her not to shame the family name by becoming a “decadent poetess”. He forced her to take a pen name, and she chose the last name of her maternal great-grandmother. She attended law school in Kiev and married Nikolai Gumilev, a poet and critic, in 1910. Shortly after the marriage, he travelled to Abyssinia, leaving her behind. While Gumilev was away, Akhmatova wrote many of the poems that would be published in her popular first book, Evening. Her son Lev was also born in 1912. He was raised by his paternal grandmother, who disliked Akhmatova. Akhmatova protested this situation, but her husband supported his family. She would visit with her son during holidays and summer. Later, Akhmatova would write that “motherhood is a bright torture. I was not worthy of it.”

Anna Akhmatova came into poetry as a representative of the literary movement acmeism, with her husband being one of its leaders.

It opposed itself to symbolism, with its romantic mysticism, and instead attempted to use more clear and vivid images.

Acmeism did not last for long, but Akhmatova never renounced it, although her growing literary principles were much more diverse and complicated.

Her first collections of short lyrical poems Evening (1912) and especially Rosary (1914) brought her fame. The psychologically-acute, brief pieces are known for their classical diction, detailed elaboration and use of colour.

Akhmatova’s early poems usually centre on the relationship between a man and woman during its most-significant and sensitive moments. In these anthologies, and the last pre-revolutionary White Flock (1917), her poetic manner was defined.

She and Gumilev divorced in 1918. Akhmatova married twice more, to Vladimir Shileiko in 1918, whom she divorced in 1928, and Nikolai Punin, who died in a Siberian labor camp in 1953. The writer Boris Pasternak, who was already married, had proposed her numerous times.

Nikolai Gumilev was executed in 1921 by the Bolsheviks, and, although Akhmatova and he were divorced, she was still associated with him. As a result, after her book Anno Domini MCMXXI was published in 1922, she had great difficulty finding a publisher. There was an unofficial ban on Akhmatova’s poetry from 1925 until 1940. During this time, Akhmatova devoted herself to literary criticism, particularly of Pushkin, and translations. During the latter part of the 1930s, she composed a long poem, Requiem,dedicated to the memory of Stalin’s victims. In 1940, a collection of previously published poems, From Six Books,was published. A few months later it was withdrawn.

Changes in the political climate finally allowed her acceptance into the Writer’s Union, but following World War II, there was an official decree banning publication of her poetry and Andrey Zhadanov, the Secretary of the Central Committee, expelled her from the Writer’s Union, calling her “half nun, half harlot”. Her son, Lev, was arrested in 1949 and held in jail until 1956. To try to win his release, Akhmatova wrote poems in praise of Stalin and the government, but it was of no use. Later she requested that these poems not appear in her collected works. She began writing and publishing again in 1958, but with heavy censorship. Young poets like Joseph Brodsky flocked to her. To them, she represented a link with the pre-Revolutionary past which had been destroyed by the Communists.

Though Akhmatova was frequently confronted with official goverment opposition to her work during her lifetime, she was deeply loved and lauded by the Russian people, in part because she did not abandon her country during difficult political times. Her most accomplished works, Requiem(which was not published in its entirety in Russia until 1987) and Poem Without a Hero, are reactions to the horror of the Stalinist Terror, during which time she endured artistic repression as well as tremendous personal loss.

Akhmatova also translated the works of Victor Hugo, Rabindranath Tagore, Giacomo Leopardi, and various Armenian and Korean poets, and she wrote memoirs of Symbolist writer Aleksandr Blok, the artist Amedeo Modigliani, and fellow Acmeist Osip Mandelstam. In 1964 she was awarded the Etna-Taormina prize and an honorary doctorate from Oxford University in 1965. Her journeys to Sicily and England to receive these honors were her first travels outside Russia since 1912. Two years before her death at the age of 76, Akhmatova was chosen president of the Writers’ Union. Akhmatova died in Leningrad, where she had spent most of life, in 1966.