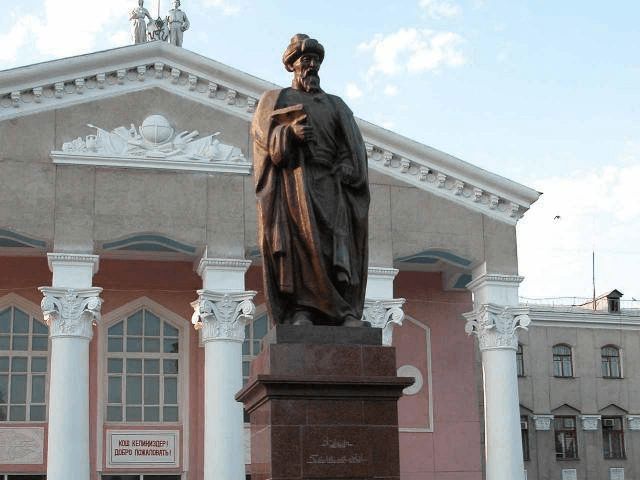 Yusuf Khass Hajib Balasaguni (يوسف خاصّ حاجب; Yūsuf Khāṣṣ Ḥājib Balasağuni; Жүсіп Баласағұни; يۈسۈپ خاس ھاجىپ; Жусуп Баласагын) was an 11th-century Central Asian Uyghur poet, statesman, vizier, and philosopher from the city of Balasaghun, the capital of the Kara-Khanid Khanate in modern-day Kyrgyzstan. He wrote the Kutadgu Bilig and most of what is known about him, comes from his own writings in this work. He is also referred to as Yūsuf Balasaguni derived from his city of origin.
Balasagun was located at the Burana archaeological site near the present-day city of Tokmok in Northern Kyrgyzstan. Yusuf Khas Hajib was about 50 years old when he completed the Kutadgu Bilig. After presenting the completed work to the prince of Kashgar he was awarded the title Khāṣṣ Ḥājib, an honorific similar to "Privy Chamberlain" or "Chancellor".
Some scholars suspect that the prologue to the Kutadgu Bilig, which is much more overtly Islamic than the rest of the text, was not written by Yūsuf, particularly the first prologue, which is in prose, unlike the rest of the text.
Some authors believed that Yusuf Khas Hajib died in 1085 at the age of 66 in the city of Kashgar, and was buried there. There is now a mausoleum erected on his alleged gravesite, first erected in the 11th century, being rebuilt in the 14th century and continuously renovated over the years with the most recent one being in 1980.